Israel is a very young country that is celebrating its 70’s birthday this year. It has faced an impressive number of wars and threats since its independence, and, hence, had to adapt to this environment to survive. Its numerical inferiority in an unstable geopolitical framework leads Israel to bet on a wide technological gap with its neighbors.

As a matter of fact, in order to remain one step ahead, Israel’s military sector developed important centers of R&D.

Innovation has always been nurtured and this resulted in the situation we know today: the “Start-up Nation”. 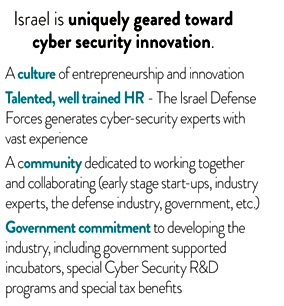 In the past fifteen years, a new threat has emerged: cyber-attacks. In this time the number of attacks has skyrocketed year after year. In 2015, cyber-attacks increased by 38% with an average of 161,927 per day. The Equifax breach, WannaCry, NotPetya, the NSA leak, and many more cyber incidents happened during 2017. This illustrates how vital innovative cybersecurity solutions are in the fight against cyber threats and the new war for which Israel has been preparing.

The e-government platform, Tehila, was established in 1997 in order to provide government offices and authorities with a secure and protected platform for connecting to the internet, intra-governmental activity, government-to-citizen as well as citizen-to-government communication, and was the infrastructure providing services to the public. This was one of the first truly effective measures that allowed Israel to stay ahead and anticipate new threats.

Israel has become a cybersecurity powerhouse at the center of an $82 billion industry. The development of an innovation ecosystem is a key factor that has contributed to making Israel a global center for cybersecurity research and practice. This ecosystem is a constantly evolving framework resulting in a collaboration between the government (including the military), businesses, and universities; with the government largely providing a guiding or advisory role.

Israel is home to more than 250 R&D centers many multinationals such as EMC, Deutsche Telekom, Paypal, Oracle, IBM, and Lockheed Martin. Furthermore, Beersheva a city in the middle of the desert will be the future home of the INCB (Israeli National Cyber Bureau). It is going to develop and reinforce Israel’s power in the cybersecurity expertise.

Beersheba, the largest city in the Negev desert of southern Israel, has the ambition of becoming a world-renowned center of innovation and cybersecurity, thanks to the development of a complete technology ecosystem, including the Ben-Gurion University with its graduate program in cybersecurity and its Cyber Security Research Center. Many R&D centers already have or are currently relocating to Beersheva. Startup incubators are popping up every year.

The Israeli government offers special income tax incentives for cybersecurity companies that relocate in Beersheva, and have pushed for a “Move to the South” – the relocation of the army’s intelligence corps. The coworking space WeWork opened a branch in town in January, an indication that the influx of startups is skyrocketing. “Projections are that 20,000-30,000 cyber and related jobs would be created in Beersheva over the next 10 years,” said Yoav Tzurya, a partner at JVP.

Beersheva’s situation should inspire cities and countries in the world in order to better face new threats and innovate more efficiently.