How has Israel become a pioneer in innovation and entrepreneurship? It is a unique combination of circumstances, culture and a strong motivation to succeed. Israel’s performance is based on 6 pillars that interact between each other in order to create a performing ecosystem in innovation. 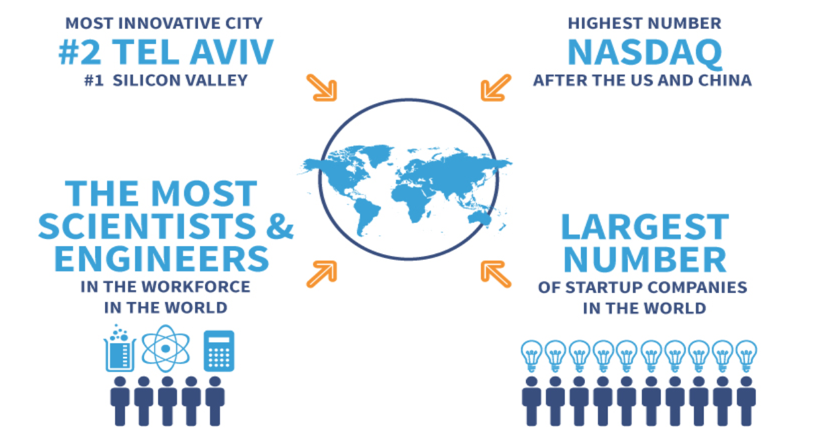 We all know a technology or a service that comes from Israel. Consciously or not, you probably use a service like USB Flash Drive, Waze, or Wix that was born in the “Start-up nation.” Israel is the second highest performing ecosystem in the world in the field of innovation, here are some examples: 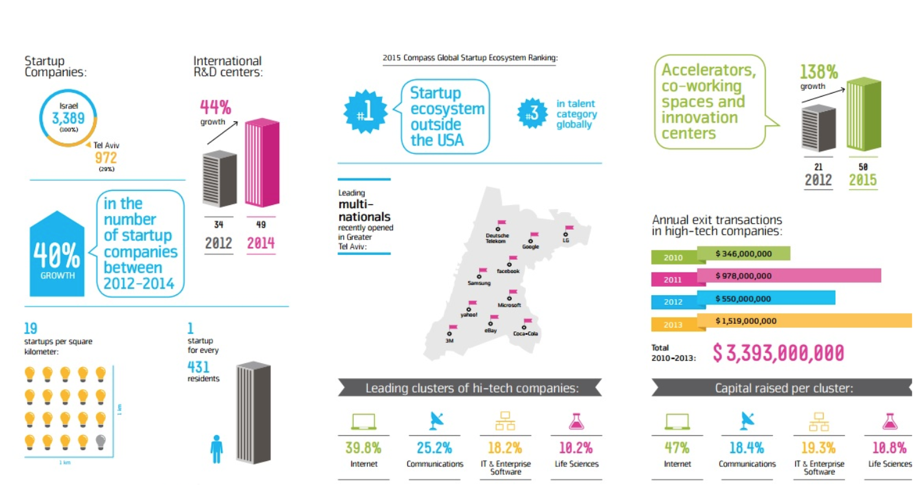 How did Israel become a pioneer in innovation and entrepreneurship? It was a unique combination of circumstances, culture, and a strong motivation to succeed.

Israel performance is based on six pillars that interact with each other in order to create a high performance ecosystem in innovation. Here is an infographic made by OneRagtime to illustrate and understand Israel’s synergies: 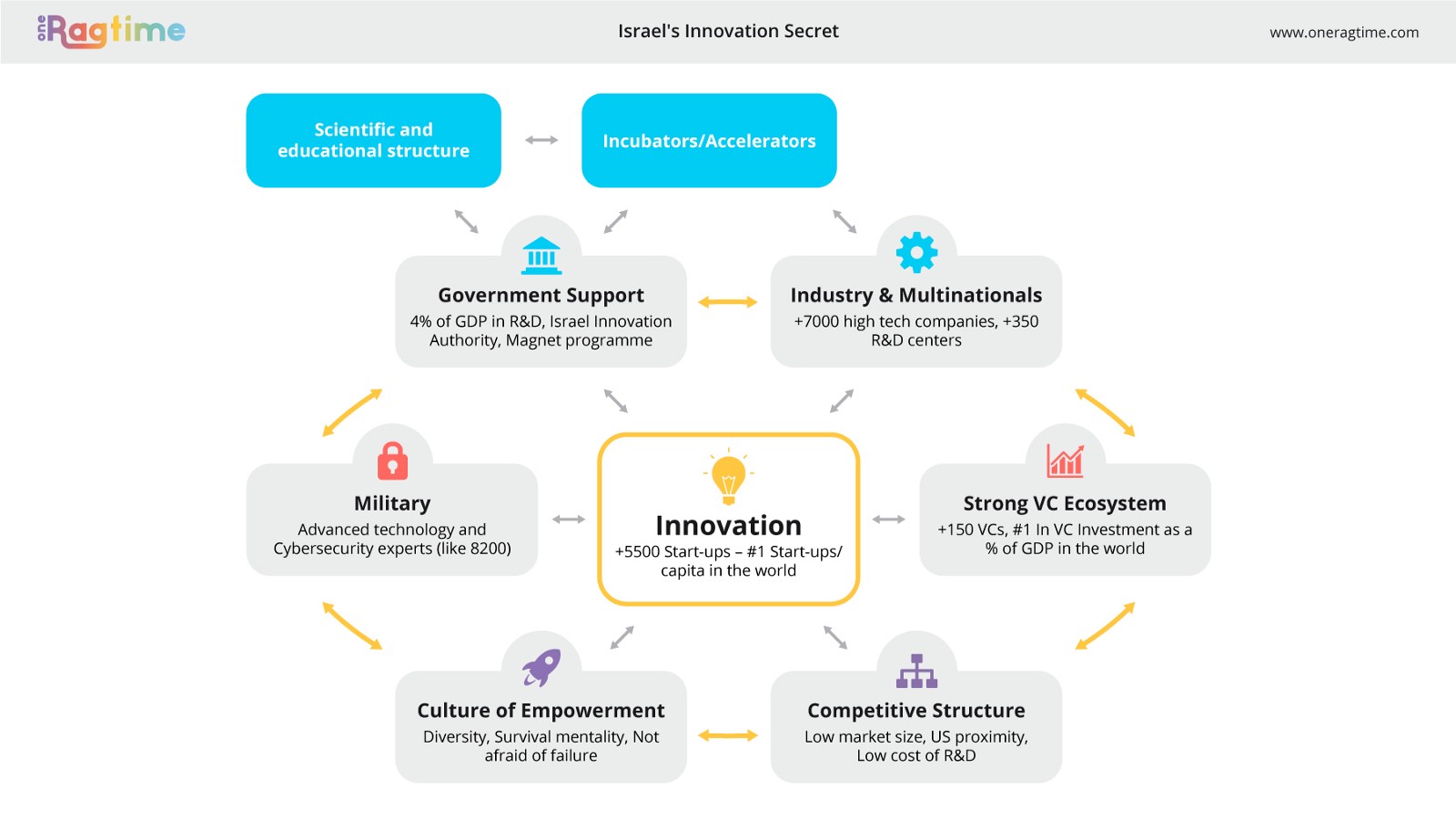 At 18 years old, young Israelis must do their military service to prepare them for their lives as citizens. During our expedition, because many students were surprised by the fact that it is mandatory, professor Pierre Kletz answered the students’ questions about how it works.

“The military service is a better way to train to people how to be independent, to develop their creativity and innovation. Israelis are trained to look for solutions and to solve issues by themselves, which is the definition of an entrepreneur. Moreover, the army allows them to become experts in technology that can easily find jobs afterward in High-Tech Start-ups.”

Israel is a little country, with only 8 million inhabitants. Tel Aviv is the second highest performing center of innovation in the world, after Silicon Valley. Each global technological company in the world; for instance: Intel, IBM, Microsoft, Google, Facebook, and Apple all have a Research and Development center in Israel. Most of these centers were the result of local acquisitions and Israeli start-ups. The diversity is also very important for Israeli. Israel is a country base on immigration. Two thirds of the population are new immigrants. These risks takers are perfect candidates to become entrepreneurs. Then, there is a huge solidarity among Israelis. Most of the successful entrepreneurs stay in Israel, sharing their knowledge and resources with the community, and most of them have become potential investors. We also find this spirit of “pay it forward” in European and US ecosystems (Cf The Family, Paris)

Israel is about 8.5M inhabitants, which often use tech entrepreneurship to extend their company internationally. The Israeli population has doubled during the last 30 years and the GDP increased by 400%. The foreign exchange rates grew by 3% which led to a 76% decrease of the national debt. Tech is their most important sector.

It is very easy to start a business in Israel as it just costs a few dollars and takes more or less one day to launch and start running it.  It is not only start-ups, which are permanently looking for innovation but also a major part of the Israel budget is allocated to the military, and R&D (20% and 4% of GDP). During our visit to the Bengis Center for Entrepreneurship in Beer Sheva, Yossi explained to us how the city successfully implemented an effective system in terms of education and in talent retention, thanks to performance infrastructure, a wide range of services, and various types of jobs.

Israel has about 350 multinational R&D centers. Most of them were created by the acquisition of local companies specialized in new technologies. Moreover, these research centers have positive effect on the economy in terms of salary and productivity. Employees of these centers work with numerous tech companies during their career, which allows them to distribute their tech and managerial skills.

With €5.24 Billion invested into Start-ups in 2017 (620 deals) and an average ticket of €8.5 Million in 2015, the VC ecosystem in Israel is one of the most active. This figure shows how the actors are organized: 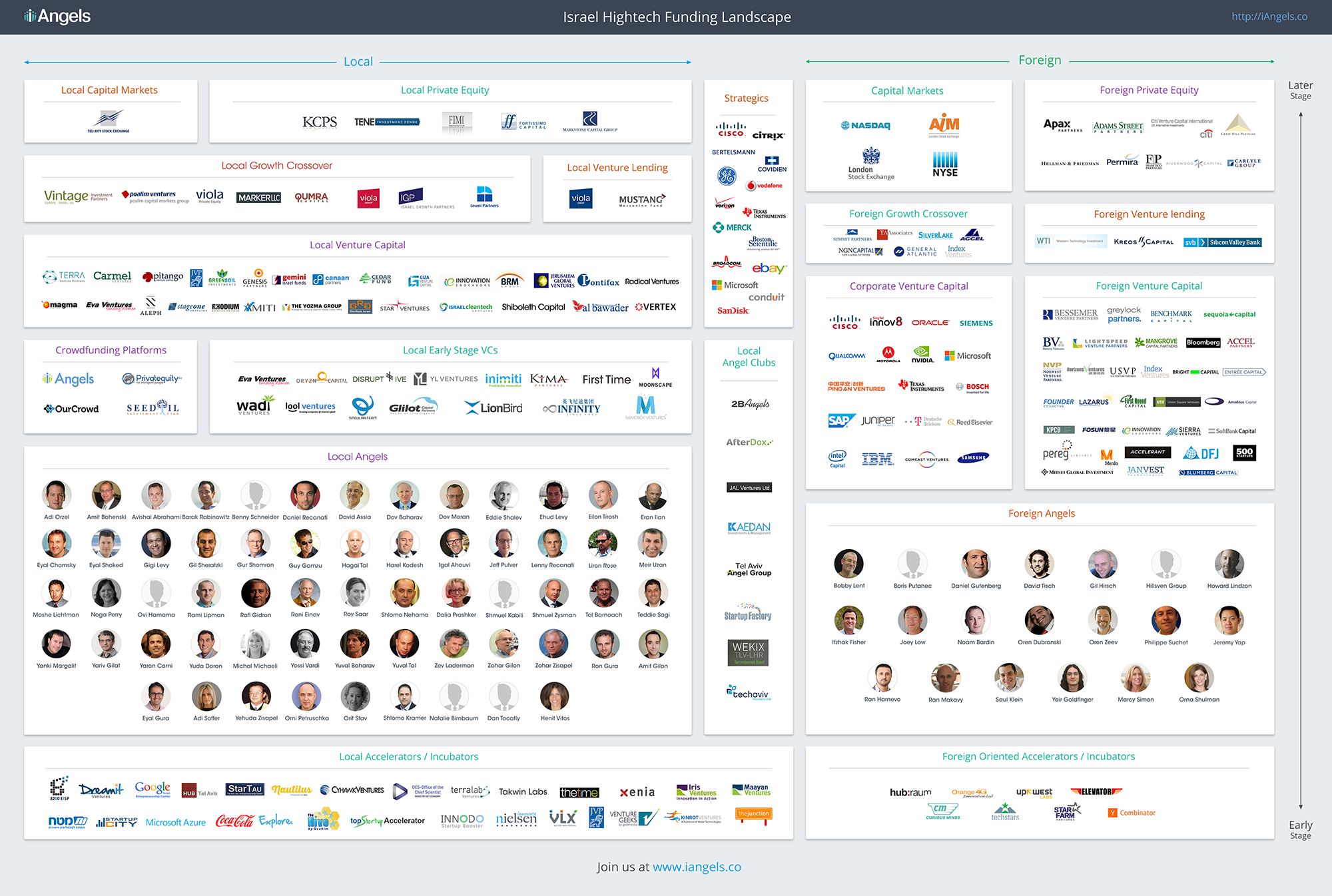 In total, 90 accelerators and Incubators are split within the 5 main areas: Beer-Sheva, Tel Aviv, Jerusalem, Hersliya and Haifa. The trends for investments are currently focused on cyber-security, Wearable technology, IoT, and bio-technology. According to a Deloitte Survey in 2014, the level of confidence of foreign investors in Israel is 3.71/5 which places the nation as 2nd Worldwide, just after the USA.
All this participate in making Israel a unique and highly performing ecosystem in innovation that has nothing to be ashamed in comparison to any other country around the world.

Follow the next episodes of the students’ journey on SKEMA Ventures’ blog.