SKEMA alumni Cédric Allin and Thibaut Desseignes’ Bieropolis, the innovative e-commerce company that delivers the best selection of craft beers, has been on a roll! It recently received the 2018 Young Company Award at the Entreprenariales contest organized by Union Pour l’Entreprise 06 – UPE06 and University Côte d’Azur (UCA). The duo received €1,500 from La Caisse d’Epargne as the prize.

At the contest, several startups had submitted and presented their project to a jury comprising Jean-Bernard Titz (Dev’Help), Laurent Masson (Incubateur PACA-Est), Ivanny Cordier (CECAZ), and Christophe Garelli. Three projects were selected for the final round where they were provided 10 minutes to present their company. Bieropolis won over the jury with their creative presentation and innovative idea. Created in 2017 and based in Innovagrasse, Bieropolis was conceptualized by Cédric and Thibaut while pursuing their master’s program at SKEMA. SKEMA Ventures’ ecosystem provided them the support and guidance they needed to bring their idea to life. For more details regarding the Entreprenariales contest, visit http://bit.ly/2C7D1xa.

Bieropolis’ profile was also featured in the cover story of Nice-Marin Économie. 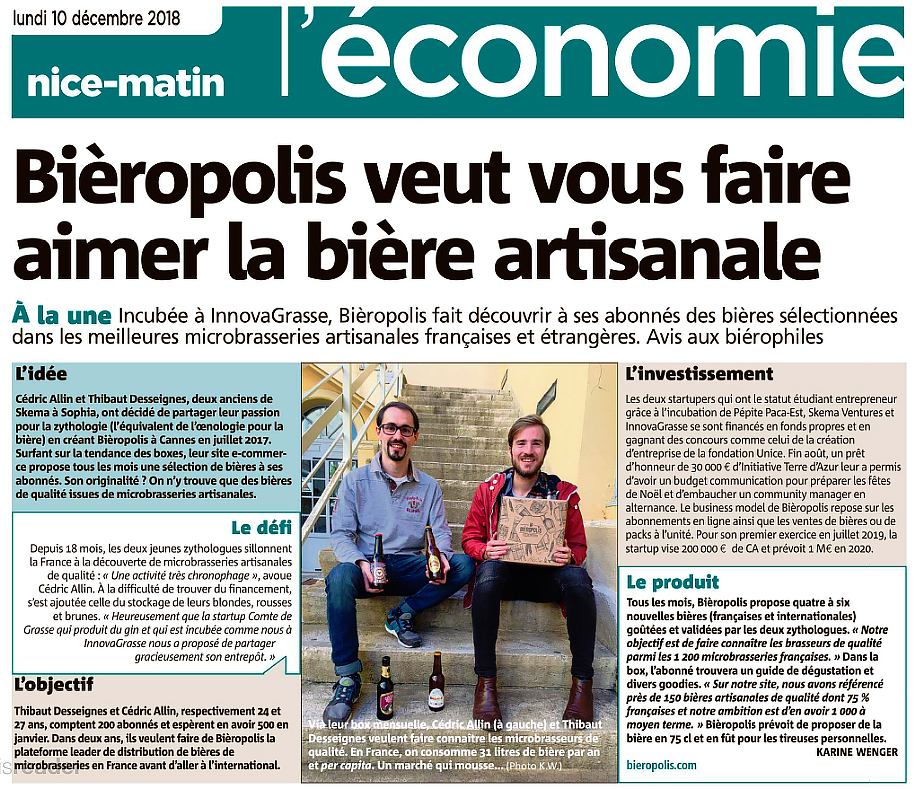 Les Picolocs, a popular YouTube channel that features and reviews various cocktails, shooters, and other similar beverages, posted an unboxing video of the special beer box that Bieropolis sends its subscribers every month. Watch the video below.

Bootstrap-Fall 2018: An opportunity to substantiate your business plan